Why you need an Income Protection Insurance Specialist: A Case Study

Gabe, Rui and their family 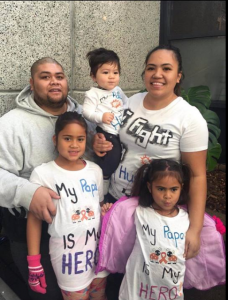 Compulsory superannuation has been around for nearly thirty years in Australia, with employers currently obliged to pay 9.5% of their employees’ salaries into a superannuation fund. These days, it is also a requirement for super funds to offer default Life, Salary Continuance, and Total & Permanent Disability (TPD) cover for their members.

If you don’t think you need TPD cover or salary continuance insurance (cover that offers financial protection against loss of income in case you cannot work), or don’t know much about it, then allow us to introduce you to Gabe.

Two years ago, Gabe was working as a social worker in various areas around Perth. He was a healthy 27 year old, had a wife with two young children and another on the way. After suffering a sudden onset of problems with his eyes and head, Gabe was rushed to hospital. After many months of investigations, Gabe was diagnosed with multiple sclerosis (MS). He was told he’d never work again. The diagnosis sent shockwaves through his entire family.

“Our third child was born the day before Gabe was diagnosed with MS,” said his partner Rui.

“It was absolutely devastating.”

Gabe knew about the insurance cover connected to his super fund (Australian Super), and he and Rui immediately began to look into lodging a TPD claim and an Income Protection (IP) claim. The TPD claim amounted to slightly less than his annual salary, and the IP claim was grossly underinsured compared to his actual monthly earnings. However, coupled with Gabe’s rapidly deteriorating health, they found the complex TPD & IP claims process overwhelming and didn’t get very far with the lodgement.

In the summer of 2018, Gabe and Rui came to Succession Matters – a full year after Gabe’s initial diagnosis.

“We were in major debt and I’d become Gabe’s full-time carer, as well as looking after our three young children,” said Rui.

“Friends of ours had been telling us repeatedly to visit Succession Matters, who had already helped them with a successful claims pay-out. They suggested we visit the team to see if they could help with our TPD & IP claims, as we were getting nowhere. So, we went to see them.”

“At the time, we thought we had only one superannuation account. But after a thorough investigation by the Succession Matters’ Insurance Claims Manager, we were told Gabe had, not one, but four separate policies that we didn’t know anything about!”

All the hard work the team at Succession Matters had put in came to fruition, with discovering Gabe and Rui had insurance cover of more than ten times the amount the couple had originally thought!

“We completed our due diligence and investigated all Gabe’s accounts, establishing there were multiple claims for TPD and Income Protection cover that Gabe & Rui weren’t aware of,” said Succession Matters’ Claims Manager.

“We were then able to lodge claims with the three separate insurers on their behalf. By November 2018, all claims had been paid out to Gabe and his family. Gabe originally thought he had only one small claim but ended up walking away with ten times the amount.”

“Not only that, but one of the policies will continue to pay Gabe out until he is of retirement age.”

One year later, and life for Gabe, Rui and their family is very different.

“We’ve been able to pay for Gabe’s specialists and medication, which is very expensive. We’ve also been able to buy a mobility scooter and van, which has helped Gabe enormously. And we’re looking at buying our first home.”

“We are absolutely indebted to the team at Succession Matters. We appreciate the work they did for us and would highly recommend them.”

If you’d like to learn more about how Succession Matters can help with your insurance needs or potential claims queries, get in touch with one of the team today on 6336 9700, or fill in our contact form here.